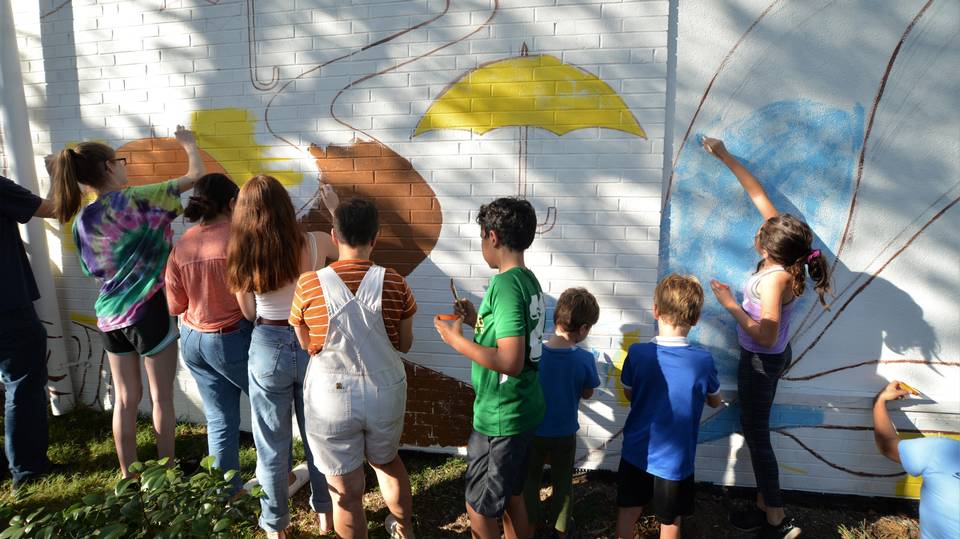 We’re so excited to have local artist Cornelio Campos working on our community mural at our Durham clinic. Check out a story The Durham Herald Sun wrote about our mural and the Lakewood community here: http://bit.ly/2IRuamj

Art has a way of wiggling into the tight spaces and opening things up.

The first brushstrokes were made Saturday on a new community mural in Durham’s Lakewood neighborhood, a corner of the city heavy with new housing developments and significant home renovations.

On the wall in the middle of a strip mall are the moon and stars, open hands, butterflies and trees, bookended by the sun and Statue of Liberty. Painted in both Spanish and English is the message “Welcome home.”

The mural covers the exterior wall of El Futuro, a mental health clinic largely serving local Latino and immigrant communities, and updates an original mural painted in 1998 by local artist and teacher Sandee Washington. That original mural was part of Durham’s Busy Street, a playground for kids depicting a miniature town, and featured a fantastical scene of a bride flying a horse off of a cliff on her wedding day and a wall-sized poem.

Washington was involved in the updating of the mural, blending pieces of her work with the new design.

“The neighborhood has changed, the mural has to change with it,” Washington said.

The new mural was designed by Mexican-American artist Cornelio Campos, who has lived in Durham since the early 1990s and recently completed a new Diego Rivera-inspired mural on East Chapel Hill Street in downtown Durham for the North Carolina Museum of Art. The Lakewood community had a say in the mural’s design, Campos said, through input meetings.

“The inspiration came from the community,” Campos said, “to feel welcome in this space, something bright and colorful that feels good.”

The mural is funded by the Z. Smith Reynolds Foundation’s Inclusive Public Art grant. Campos said he is hopeful that art remains a priority in Durham.

“Art is always the first thing to go,” Campos said. “To me, as an artist, art is the sign of a healthy society. Durham is a healthy city.”

The El Futuro clinic opened in downtown Durham 15 years ago, founder and psychiatrist Luke Smith said, and moved to Lakewood last year, where an office of 45 serves hundreds of clients.

Caught in the vivid light of an October afternoon, the corridor seemed to sparkle where painters put their brushes on the wall. The shopping center itself is far from shiny and new, and Smith said the strip of grass between the buildings had become a small field of discarded beer bottles and trash as the original mural faded in the sun. The space is a heavily used path connecting different parts of Lakewood and a route taken to Food Lion and other stores.

Smith said they wanted this highly visible space to continue feeling welcome, but also something to be proud of. Saturday’s kickoff party included coolers of 300 homemade tamales and a large tres leches cake.

“We wanted to create something that would viscerally connect with the community,” Smith said of the mural.

El Futuro’s clients by and large are immigrants from Mexico, Honduras and other Latin American countries, Smith said. Moving to Lakewood meant moving into one of Durham’s higher concentrations of Latino residents, Smith said, but as the city attracts more and more newcomers, that neighborhood is quickly changing and gentrifying. Smith said Lakewood is currently ethnically and economically diverse, but that projects like the mural could be new points of intersection.

“The upstream problem is that people are disconnected from each other,” Smith said. “Some work two or three jobs, they come home, they crash, they go back to work. There’s little time to have that experience of connecting with neighbors. Hopefully as people come to do their work together there’s a connection.”

The Lakewood Shopping Center is split in two, and the new mural in between sits on the very edge of Durham’s development pressure. El Futuro’s landlord is the Scrap Exchange, the Durham nonprofit thrift store and craft space, which bought 10 acres of the shopping center in 2016 for $2.5 million. The next parcel over, currently occupied by Food Lion and other tenants, was purchased in foreclosure last year by Greenville developer BrodyCo for $5.25 million. It appears larger development will come at some point, but so far, no plans have been disclosed.

As the mural came together Saturday, some brushstrokes strayed over the lines, some paint ended up on foreheads and fingers, many strokes were made with the care and concentration that they might be on the wall for decades.

“It’s wonderful that everyone is painting the mural together,” Scrap Exchange Executive Director Laura Nicholson said. “It brings so much more life to the mural. If you could sum up Lakewood on a wall, there it is.”